As we all know, our local wildlife has flourished during lockdown this spring and summer. I have photographed some nice wild flowers along the nature trails in Brook Wood and Dingle Wood, including Moschatel. Sweet Violet is well established on the Rail Trail. Tawny Owls are often heard around the Park area and a young Great Spotted Woodpecker was there. A Kingfisher has been seen flying up the valley to the old mill pool above the weir on Mill Hill Lane. (Grey Wagtails nest there too, and at Brook Bridge). A fine colony of Butterbur grows by the river below the Wheelock football field. Little Owls may have nested not far from the Queens Drive estate. Not all of our wildlife has appeared naturally. Several spikes of Common Spotted Orchid flowered in the wildlife area of Sandbach Park; they had been planted there but are from local rescues and we wish them very well for the future - they look nicely settled.

But elsewhere, I found an even stranger artificial delivery today when a shocked dog-walker outside my house pointed out two Elephant Hawk Moth caterpillars on the grass by the road! I attach a couple of pictures.The larger stretched to some four inches long (when it felt like it). I can only think they must have been dumped there by some equally shocked person who found them in their garden. I looked up their food plant on Google, and discovered to my delight that one plant which Elephant Hawk Moth caterpillars will consume is Himalayan Balsam! So they are now chomping away not far from here on one of Sandbach's most pervasive pests. That's the sort of biological control measure that I like! I hope you see one of the moths later. 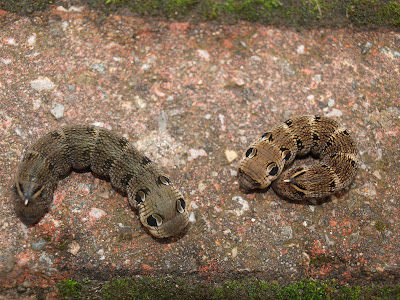 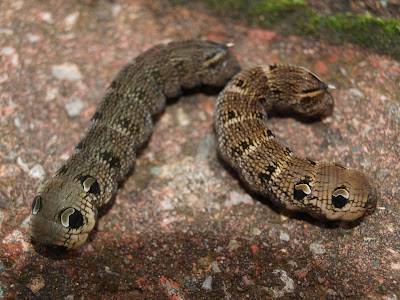 Posted by Sandbach Woodland and Wildlife Group blog at 19:34