This Saturday, 14th October, sees the formal opening of the new Sandbach Bridges Trail (North), which follows a route from the bypass roundabout north along Arclid Brook and complements the Sandbach Bridges Trail (South) from the same starting point to Wheelock, and was opened in 2015.
The official opening  of Dingle Wood Bridge and Trail by Fiona Bruce MP will be on Saturday 14th October at 11.00 am. It will be followed by a Children in Need Countryfile Ramble which will follow the new Trail, followed by a return route which will also visit the new path at The Dingle.The length of this walk is approximately one mile. A map of the route of the walk on Saturday, prepared by Roger Foden, appears below. See you there? In addition, new links to this and both the other Trails now appear in the panel to the right - download them for free! 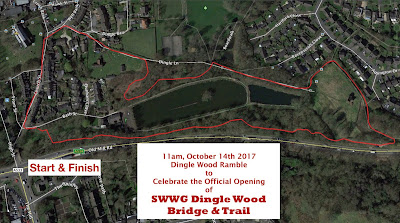 Posted by Sandbach Woodland and Wildlife Group blog at 15:39 No comments: