Not a sad flower!

A very nice discovery yesterday was a rather rare wild flower beside the new Dingle Bridge footbridge. No wild flower seed has been sown - or plants introduced - at that spot, but a large and healthy-looking plant (or maybe two plants) of Melancholy Thistle has appeared there. A tall, thornless thistle with big purple heads, Melancholy Thistle (Cirsium heterophyllum) is a rather rare species of damp places on northern hills and mountains and forests. Although it has a sad name, it was not given that name because it made people sad but because the cheerful sight of its big, bright heads was considered good for melancholy! 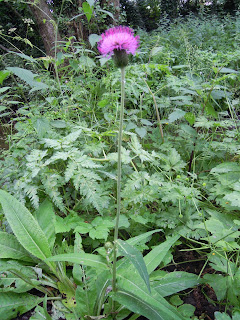 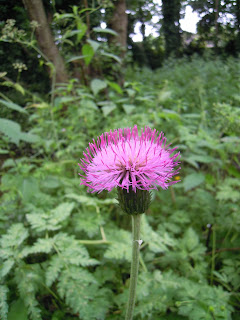 It was almost certainly introduced with stone or limestone chippings (it grows on the Derbyshire limestones) when the new footbridge was built. It is not, of course, a native species here. But since no-one deliberately introduced it, it counts as a "wild" flower for botanical record purposes.So it has now been accepted as a proper Cheshire record - and Dingle Bridge is now one of only three known sites in Cheshire for this plant. (The other two are  thought to be a site in the eastern hills where Melancholy Thistle is a native species, and another "accidental" site in the middle of Delamere Forest.) - George

Posted by Sandbach Woodland and Wildlife Group blog at 15:49 No comments: